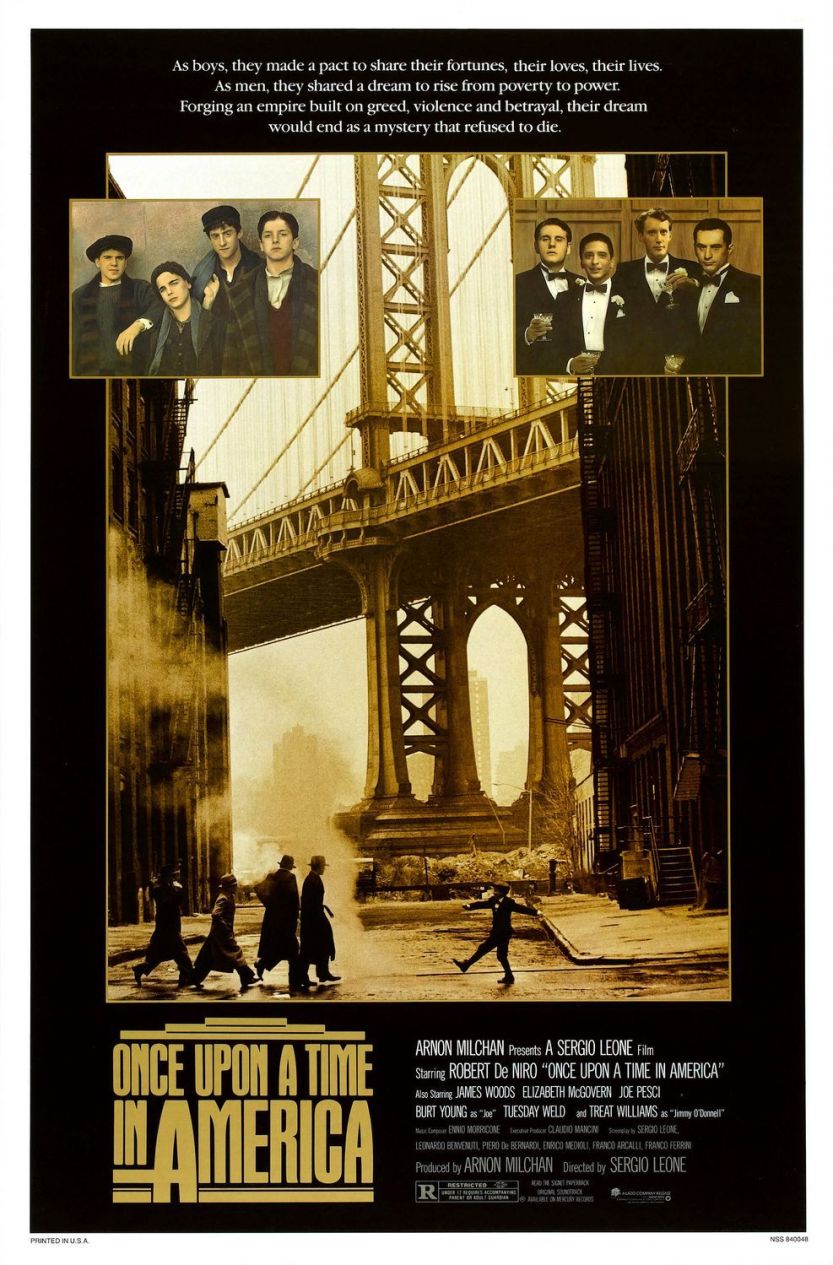 In this blog, I am now going to tell you why this four-hour creative masterpiece (yes you heard me right, its four hours long) is the greatest gangster film of all-time. And, why many of you have never even heard of it before…

Directed by the creator of spaghetti westerns, Sergio Leone was determined to expand from his creations such as A Fistful of Dollars (1964), For a Few Dollars More (1965) and The Good, The Bad and The Ugly (1966) with a hope to fulfil his passion of creating a true American gangster film, and boy did he succeed!

Following the lives of four Jewish New York gangsters during the period of prohibition, the film uses a series of flashbacks to tell the story of these men through the eyes of the main character ‘Noodles’ (played by Robert De Niro) after his return from a self-imposed exile. Exploring the idea of friendship, betrayal, love, lust and greed, the film reflects the true meaning of the ‘American Dream’ and how easily it can be corrupted.

Why is this film so good?

Besides the fact that such a talented director directed this film, the combination of the intricate storyline and Leone’s on-screen portrayal of this is what makes it such a magnificent watch.

Filled with the true grit and depth, you would expect from a typical New York set gangster film, through Leone’s directing the story goes further than the gang rivalry and street shootouts you would usually expect. Delving deeper into the relationships between the main characters the film explores how these young men had a vision of the ‘American Dream’ (wealth, wife and a white picket fence) and how their means to achieve this became distorted which ultimately led to their downfall (a commonality in many gangster films).

With an interest in grotesque faces, Leone often used many extreme close-ups to show the true emotions of the character which often juxtaposed with his use of mid and long shots used throughout the rest of the film.

It’s these extreme close-ups which make his filming so distinctive and exciting compared to other directors of the time. Additionally, in many of his films, he used well-liked Hollywood actors and turned them into ‘bad guys’ on screen which shocked audience members. One example of this is in Once Upon A Time in the West (1968) where Hollywood hero Henry Fonda becomes a villain within the first few minutes of the film when he shoots a young, newly orphaned boy.

However, in Once Upon A Time in America, Leone steers away from this as he only shows bad people doing bad things. Although we begin to like and sympathise with them (come on, who doesn’t love De Niro), he never fails to remind us that these are ultimately bad people.

The distinctive score created by Ennio Morricone, who often partnered up with Leone in his westerns, is an additional element that makes the film so intriguing and memorable.

Why has it not had the recognition it deserves?

Completing filming with 10 hours’ worth of footage, Leone edited the film into a 4-hour (269 minutes to be exact) feature film. But, upon release he was forced to shorten it to 229 minutes to appease European distributors.

Initial reactions were exceptional as Leone received a 20-minute standing ovation at the Cannes Film Festival and European audiences praised his work. But upon release in America, distributor The Ladd Company decided to cut the film to 2 hours without the consent on Leone. This version received harsh criticism, left The Ladd Company on the verge of bankruptcy and resulted in the end of Leone’s filmmaking career.

In other countries such as the Soviet Union they split the film into two separate films, rearranging the whole film entirely.

Decisions like these severely hindered the success of the film, hence why many have never heard or seen it.

Only in 2012 was the film restored to a 251-minute version which was shown at Cannes Film Festival.

The importance of the plot twist and ambiguous ending.

One of the most discussed areas of the film is the plot twist in which it is revealed that Max, now Mr Bailey, has married Deborah (who has been raising her and Noodles’ child) and invited Noodles to a party to ask him to kill him. After Noodles declines, we see a figure stood near a garbage truck. The shot switches to Noodles and back to the (now moving) truck and the mysterious figure has now vanished. Some believe Max committed suicide by climbing into the truck which essentially crushed him; others disagree.

The beauty of the film’s ending is that it makes you question everything you have seen for the past four hours, leaving you with the question: WHY?

After much deliberation, I came to my conclusion as to what I think happened (feel free to leave your thought on the plot twist/ending below). I believe that Max’s relationship with Noodles went beyond a friendship (in Max’s eyes) which drove the rest of the plot. Max always desired the women Noodles has already slept with e.g. Peggy, Carol, Deborah (he saw it as a way to be close to Noodles), and always did as Noodles desired (the long stares of affection confirm this).

Carol also stated that Max feared insanity as his father ended up in a mental facility. This is important, as in the 1920s and 30s being gay was seen as a mental illness. Therefore, after Max stole Noodles’ life, (e.g. Deborah, Noodle’s son, the money) he felt guilty. Now that his past was beginning to catch up with him, he asked Noodles to be the one to end his life as Noodles was the only one he ever truly felt something for, but ultimately betrayed him in the process. When Noodles declined, he decided his only option was to commit suicide.

I think Deborah chose to marry Max as she saw it as a way for her to be close to Noodles. Max was Noodles’ best friend whom she shared similar values with regarding wealth. Ultimately Deborah was more attracted to the money then Noodles (hence why she kept turning him down) so marrying Max was a way for her to feel like she could have both (fulfilling the ‘American Dream’ in doing so).

So, this leaves us with the ending. The final scene shows a young Noodles high in an illegal opium den. Many believe this was done to show that the film was all a dream created in Noodles’ intoxicated state. However, I think that it was used as a sense of dramatic irony. At this point in the film, we already know how the story ends, but for Noodles in this particular shot, he is unaware of what’s to come.

In this extreme close-up shot, Noodles is smiling because he believes that his friends have been murdered during a robbery (Max included) and now he has access to the hidden money. With this money he can now fulfil the post-prohibition plans he had (which Max failed to listen to), meaning he has now ultimately fulfilled the ‘American Dream’.